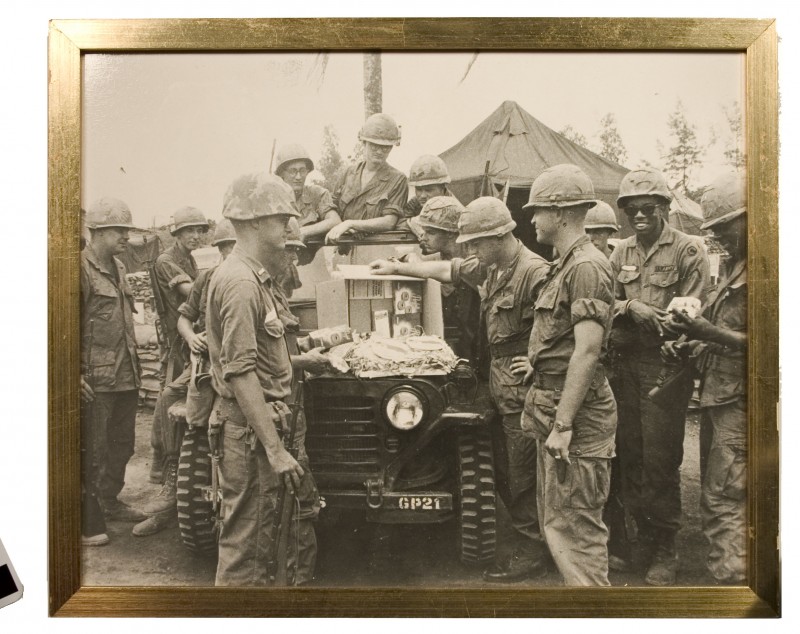 During the Vietnam War, The Grand Lodge of New York sent Gift Packages to the soldiers in the field. Beginning in 1966, with $10,000 drawn from the Victory Chest Fund, the “Grand Lodge of New York initiated a ‘continuing gift package program’ directed to all servicemen in Vietnam and to the sick and wounded in military hospitals in the Vietnam area. The Committee on Service and Rehabilitation was assigned the task of operating this program, and sent packages and packets several times a year.”

See the original photograph and other Vietnam War soldiers’ photographs from this program in the Online Museum by clicking here.

“By 1974, when the continuing gift package program was redirected to 12 Veterans Hospitals in New York State, and to the larger military hospitals in the United States and the Pacific area, the Grand Lodge of New York had shipped 2,126,217 gifts, weighing 210,697 lbs, with a value of $599,061.

In the 1969 report of the Committee on Service and Rehabilitation to Grand Lodge, there were shipments of gifts to 56 military units and 44 military hospitals in Vietnam:

“All the gifts were prepared and packed by volunteers who gave of their time and selves unstintingly. The extensive and many-faceted program was possible only through the cooperation, participation and generosity of many men and organizations.

“The Grand Lodge of New York received 35 citations from the high command, military hospitals, and Army, Navy, Air Force, and Marine Corps units, and the coveted George Washington Honor Medal twice, in 1971 and 1972 from the Freedoms Foundation at Valley Forge.

“Our thanks and commendations, which are well-merited, go to MW Lloyd S. Cochran, PGM 1972-1974, for his support and encouragement [click here to see his biography in the Online Museum]; to MW Charles W. Froessel, PGM 1944-1946, architect of Operation Vietnam and Operation Rehabilitation, for his constant guidance and confidence; to RW Wendell K. Walker, Grand Secretary 1963-1990, Honorary Past Grand Master 1979, and his staff for their invaluable assistance; to the corps of devoted volunteers, brothers of stature in the Fraternity, who have given of themselves in time, effort, and spirit in preparing and packaging shipments; to the Committee and staff of Service and Rehabilitation for their loyal and efficient service and devotion to their responsibilities; to W.. Harry Herman, Superintendent of the Masonic Hall, and to his staff for their cooperation in countless ways; to the Trustees of the Masonic Hall for their continuous generous cooperation; and to many, many faithful Brothers for their assistance in so many ways.

“We reach out to the sick, wounded and disabled in military and veterans hospitals, so many for whom the war will never be over. We reach out to these men because we care.” – Grand Lodge of New York Proceedings, 1966; 1969; 1974, pg, 258