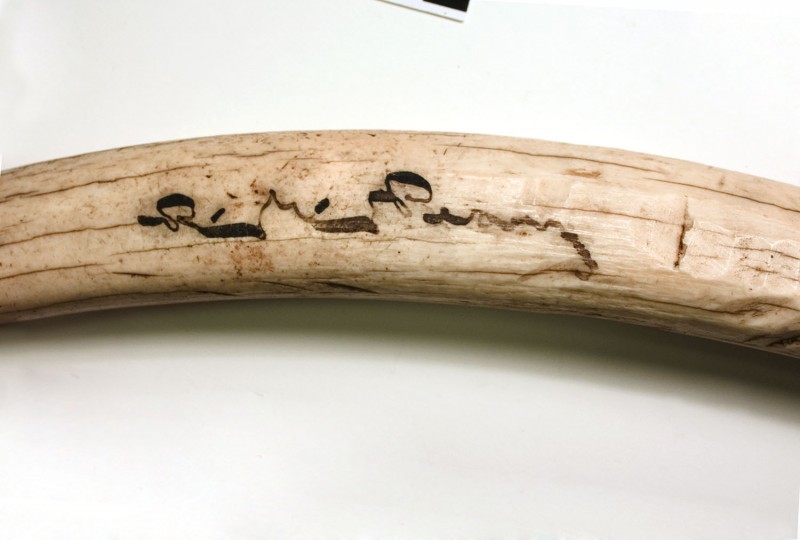 Robert Edwin Peary was born in Cresson, PA. He graduated from Bowdoin College in 1877. In 1881, he joined the U.S. Navy as a civil engineer with the rank of lieutenant. In 1891, he headed an Arctic expedition for the Philadelphia Academy of Natural Sciences and made a 1,300 mile sledge journey across Greenland, during which he discovered Melville Land and Heilprin Land and established the fact that Greenland was an island. In 1902, he made an unsuccessful trip to reach the North Pole, and, trying again in 1906, he came within 200 miles of the Pole. He began his successful trip to the Pole on August 18, 1908 and reached the Pole on April 6, 1909, remaining at the Pole for 30 hours. In 1911, he was made a Rear-Admiral. (Munn Lodge No. 190, 1964)  Much of Peary’s success is due to his plan of establishing food depots along the trail which would lessen the load of the north-bound trip. He was also the first to utilize sled dogs to pull the explorers northward.

The tusk pictured here was donated in 2003 by the widow of Right Worshipful Rinaldo Morgante, a member of Bryn Mawr Lodge No. 882, Yonkers, NY, and is part of the artifact collection of the Grand Lodge of New York.