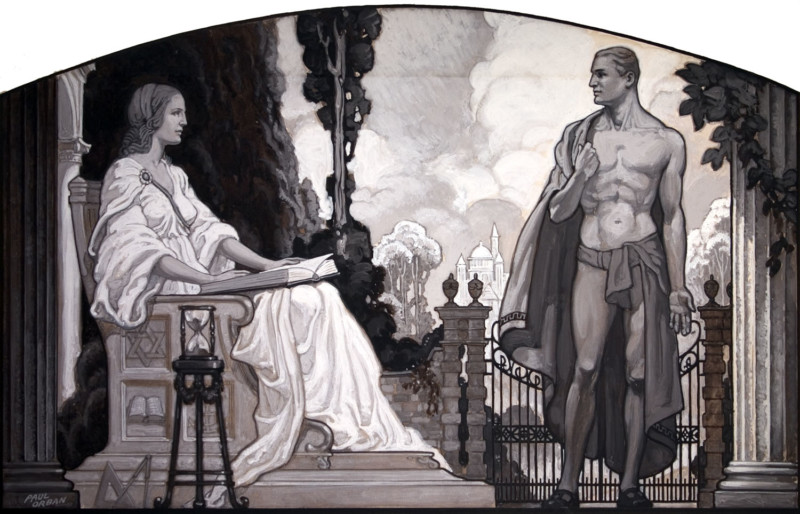 This painting by Paul Orban, titled The Gateway, was used to illustrate an article by RW H.L. Haywood which was published in The New York Masonic Outlook, May, 1930.  RW Haywood was a Masonic author and the editor of the New York Masonic Outlook, 1925-1930. A member of Publicity Lodge No. 1000, he served as Grand Representative of the Grand Lodge of Michigan near the Grand Lodge of New York. Born in 1886, at the age of three, he was reading fifth-grade level books, and graduated from high school at the age of 13. One of his most cherished achievements was that he had taught or lectured on every major college campus in the United States. The article was titled, Qualifications of a Master Mason. In the article, RW Brother Haywood writes:

“Freemasonry is, first of all, a fraternity. By a fraternity is meant a society of men, organized under a set of rules, who are devoted to a subject of great importance and value. In the case of Freemasonry, this subject is brotherhood, with all the richness of its content and the many phases and aspects of its existence. There are many differing theories as to what brotherhood is: Freemasonry has a theory of its own which all Masons believe to be the true one. What that theory is calls for a separate study … for the present purpose it is sufficient to understand that our Craft is a fraternity devoted to brotherhood as understood in a certain way.

“Men differ very much among themselves about some matters. Some men like to fraternize, others do not; some can, others cannot. Some men believe in brotherhood, know it to be of the greatest value to humanity, are interested in it, want to understand it, desire to live it; others do not believe in it, attach no value to it, are not interested. Among those who believe in it are many whose theory is of one thing, others, another thing; they differ as to what brotherhood is, so that among them may be some who agree with Freemasonry’s theory of it, others not.

“From this it necessarily follows that in admitting members to the Craft, one must select only those who enjoy fraternizing under a given set of rules in their devotion to brotherhood, and who believe in the Craft’s understanding of it … in the long run, only such men are really able to become Masons … These are facts that hold everywhere and always … and do not depend upon temporal or local conditions; therefore they constitute a principle. What we call the Doctrine of the Qualifications of a Mason is an expression of this principle.

“A man is not supposed to become qualified for Masonry after he becomes a Mason, but before. If he have not the qualifications to begin with he is under a moral obligation not to petition; and if, not sufficiently understanding the principle involved, he does petition, the Lodge is under a moral obligation not to accept him. The rejection of such a petition casts no reflection whatsoever on the moral character of the petitioner, because the canons of membership are not relative to the nature and purpose of Freemasonry, nor to any possible court of moral judgment. A Lodge does not ask, Are you a good man or bad? It asks, Do you have the qualifications required for membership? Nor is a rejection an unkindness to a man; the unkindness would occur if time and money were taken from one of whom it is known in advance that he would not successfully find his natural place in such a society as Freemasonry and be happy in it. It is better for him to know this beforehand than to discover it – to his cost and the Lodge’s – afterwards.

“There is nothing arbitrary about this principle, for it is not born of prejudice or governed by caprice; it is merely the Fraternity’s way of discovering who naturally belong to it and who do not. All similar societies act according to the same principle …If a college fraternity is set up, membership is necessarily limited to college men …

“It is a fallacy to suppose – as is so often done – that the standard of qualifications is a one-sided precaution, used solely to protect a Lodge against undesirable material; that standard rests upon the principle of justice and therefore works as much to the benefit of the petitioner as to the Lodge he petitions. Imagine a man to stand under the sincere believe that Masonry (like some associations) exists to give its members an opportunity for professional or commercial advantage; if he is admitted to membership on that condition he is certain to be disappointed; working in a Lodge is so poor a way to make money that any sensible business man would tell the candidate that he is wasting his time. Image a man with the motive of advancement in politics … Or take the case of a man seeking social prestige; he cannot secure it through the Craft because the Craft is not recruited on the basis of social position … we can see how the qualifications requirement will operate [to the benefit of these men]; it will save them from a  useless expenditure of money and effort, and protect them from certain disappointment .. The requirement … exists as much to their advantage as to the Craft’s …

“The qualifications are required not merely to enable a man to become a Mason; they exist principally in order for him to be a Mason. That is, the qualifications are quite as necessary after a man becomes a member as before .. the point is.. that throughout his whole career in his Lodge a man must possess these qualifications if he is to live the Masonic life with satisfaction to himself and honor to his fellows. To put it in the fewest possible words, a man cannot be a Mason except he be a certain kind of man…

“The purpose of all, and any, required qualifications is a description of the kind of man who should seek to become, and who could successfully continue to be, in practice and ideal, a member of the Masonic Craft, Freemasonry being understood as a fraternity of men, under certain rules and regulations, and using appropriate means, devoted to brotherhood, as brotherhood is envisaged and defined in the Craft’s Constitutions, Landmarks, laws, ideals, traditions, and practices.” (Haywood, 1930)

Paul Orban, 1896-1974, was an artist best known for his illustrations of the science fiction and fantasy pulps and magazines, his work appearing in countless titles, including but not limited to, “Astounding Stories, Astounding Science-Fiction, Clues Detective Stores, Popular Detective, Skyfighters, Strange Stories, Terror Tales, Popular’s Horror Stories, Texas Rangers, Thrilling Adventures, The Shadow, The Whisperer, The Phantom Detective, The Avenger, and Doc Savage. He illustrated Doc Savage from its first issue right up to its last in 1949. (Kalb, 2004)

Paul Orban was not a Mason. His Masonic work, while well-known to the readers of the Masonic Outlook, appears to have been entirely unknown in non-Masonic circles. He produced cover and interior art for the Outlook between 1929 and 1932 and the Chancellor Robert R Livingston Masonic Library of Grand Lodge of New York is in possession of over 17 original works by Paul Orban, most with Masonic themes.

Haywood, H.L., Qualifications of a Master Mason, The New York Masonic Outlook, The Board of General Activities of the Grand Lodge of New York, Boonville, NY, May, 1930;
Kalb, Dave, The Avenger Archives, website: http://members.aol.com/macmurdie, 2004