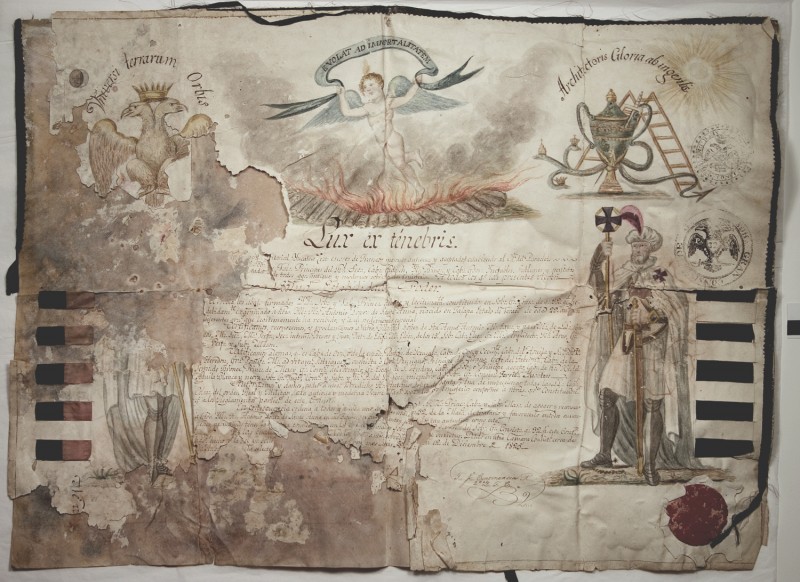 Click here to see the full artifact record in our Online Museum.

There had always been the rumor of Santa Anna giving the Masonic sign of distress, which kept General Houston (a Freemason) from killing him in revenge for the slaughter at the Alamo, but prior to the finding of this certificate, there was never any hard evidence.

In 2006, three years after I began working here, I came across a vellum document, with a hand-painted certificate sewn on top, all folded into a small rectangle. After sitting for two years in my system for safely unfolding documents, it was flat enough for me to examine. It was at that time that I discovered the amazing nature of the artifact. The artifact record sat in our Online Museum until 2014, when a chance meeting with a Texas scholar brought the certificate into the light.

In Volume 1, 2015 of TEXAS HERITAGE, A Publication of the Texas Historical Foundation, Marshall J. Doke, Jr., Chairman, Texas Scottish Rite History Committee, and Past President and Chairman of the Texas Historical Foundation, wrote an article, “Santa Anna’s Masonry Confirmed,” featuring the certificate held by the Chancellor Robert R Livingston Masonic Library of the Grand Lodge of New York. The original article utilized five of the photographs taken by Curator Catherine M. Walter (You can view these photographs and more in our online record, linked above).

Not only does the Grand Lodge of New York’s Library and Museum hold spectacular original or primary source documents such as this one, many are featured in our Online Museum.

We hope you visit and take some time to explore your history!