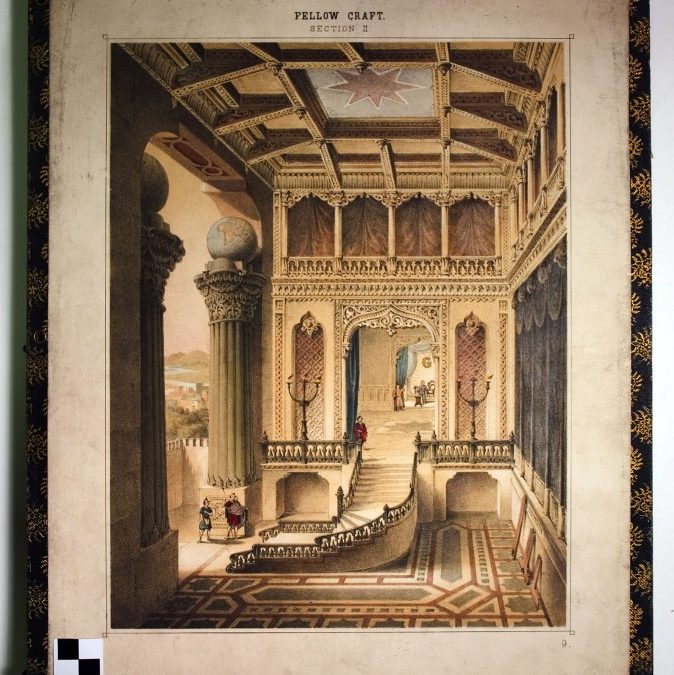 The Book of the Lodge holds richly-colored lithograph prints, a set of fourteen Masonic Emblems that symbolize the Three Degrees of Masonry. Following the fourteen color lithographs are: a sample Master Mason certificate, two pages showing the different Jewels of Office and eight pages of Songs for use during rituals.

Seen here is the frontispiece: 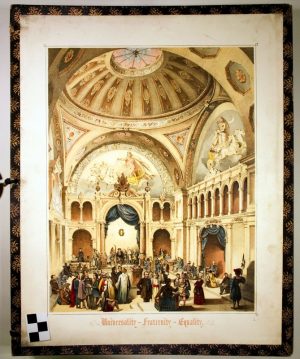 “Plate I: The Frontispiece. This elegant illustration represents the interior of a Lodge Room – ‘The Temple of Masonry,’ – in which the universality of the Fraternity is exhibited by the Masonic Representatives of the various nations of the earth, each in his appropriate national costume, who meet as a band of brothers upon the broad platform of equality, as exemplified in the general and attractive bonds of union by which, as a brotherhood, they are united. Eminence of position, on the one hand, is placed side by side with its reverse – opulence stands beside comparative poverty – the crowned king unites fraternally with the mendicant – yet all blend together in peace and harmony – the high – the low – the rich and the poor, all remember that they were created by one Almighty Parent; and, linked together in sincere affection, they beautifully illustrate the cosmopolitan character of the Craft, fully portraying the motto, Universality – Fraternity – Equality. Brother George Washington presides in the East, as Worshipful Master; Brother Gilbert Mottier (sic) Lafayette occupies the West, as Senior Warden; and Brother Benjamin Franklin assists in the South, as Junior Warden.” (Macoy, 1855)

The other Plates in The Book of the Lodge are equally stunning: Click here to see The Book of the Lodge in its entirety. (Note: click on the thumbnails in the upper right corner to see each plate in succession.)

Robert Macoy served as Master of Lebanon Lodge No. 13 in December of 1849, shortly after joining Freemasonry. The following year, 1850, he was elected Grand Secretary of St. John’s Grand Lodge. He was a member of the committee that formulated the settlement for the union of the two Grand Lodges in New York City on December 27, 1850.

Brother Macoy was responsible for the establishment of the Order of the Eastern Star which was founded in 1867. Brother Macoy was named as Supreme Patron in 1868, after the founder, Brother Robert Morris, passed the title on to him.

Robert Macoy’s name is most familiar to the Fraternity as the supplier of the paraphernalia, furniture, jewels, costumes and books of Freemasonry. He founded his company in 1849, providing these items. The Macoy Company exists to this day.