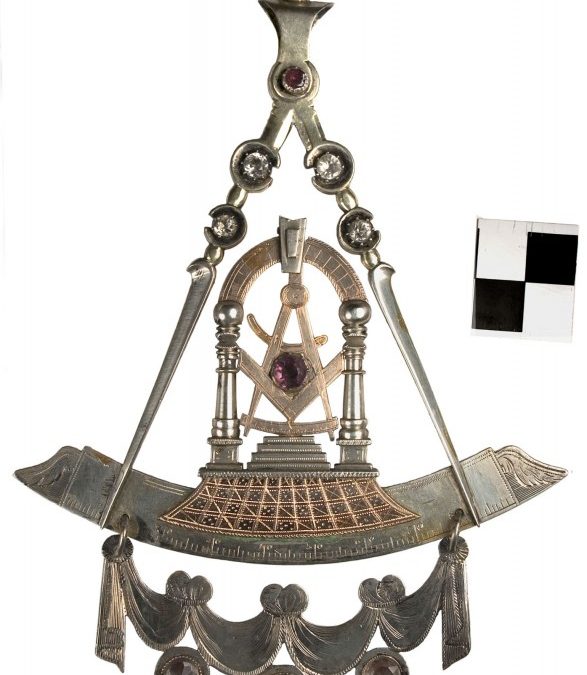 This magnificent jewel was presented on April 12, 1831, to Worshipful Master William Cuscaden by Benevolent Lodge No. 142, New York. It is made of gold, silver and composite metal, with inlaid rhinestones and an amethyst, and with what may be a ruby at the top.

On September 27, 1837, Worshipful Brother Cuscaden was elected to the office of the Grand Treasurer of the first St. John’s Grand Lodge, serving as such until December 5, 1837, where the list of officers shows Alexander Cuscaden taking over as Grand Treasurer, while William Cuscaden served as Grand Marshal.

The original Warrant of 1806 was returned to Benevolent Lodge No. 28 of the legitimate Grand Lodge on June 7, 1883. (See A53-131 Print, 1850 Masonic Union, in the Art Collection of the Online Virtual Museum to view more of the history of the Union of the St. John’s Grand Lodge and the Grand Lodge of New York.)

Benevolent Lodge No. 28 merged on February 13, 1974 with Independent Royal Arch Lodge No. 2, New York, NY. Click here to see the full record of the jewel and the history of St. John’s Grand Lodge.