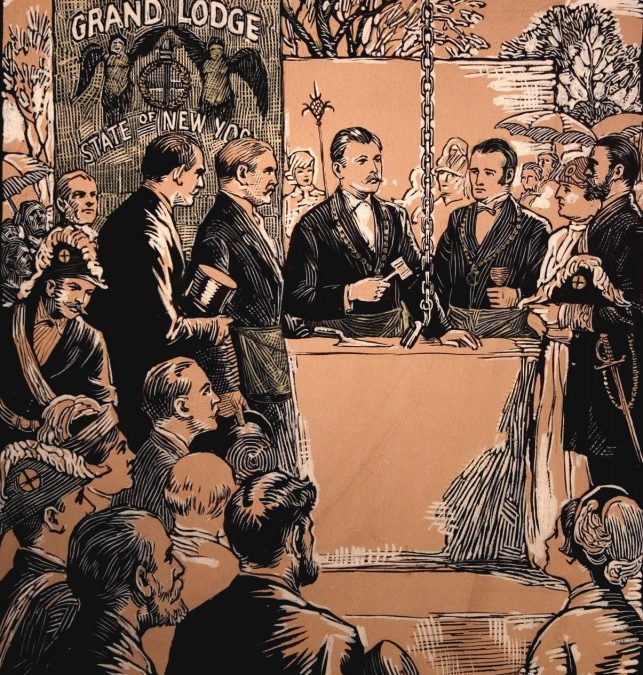 This painting by Paul Orban shows the 1880 cornerstone-laying ceremony for the Egyptian Obelisk known as Cleopatra’s Needle in Central Park, New York City, NY, and it illustrated the title page of The New York Masonic Outlook, January, 1930. The caption reads: “On October 9, 1880, the corner stone of the foundation for the Egyptian Obelisk was laid in Central Park under Grand Lodge auspices, with MW Jesse B. Anthony, Grand Master, in charge, and RW Edward ML Ehlers as Marshal of the Day.” (Outlook, 1930)

The corner-stone laying was held near the Metropolitan Museum of Art in New York City. Over 9,000 Freemasons formed a parade column on Fifth Avenue, prior to entering Central Park at 82nd Street. “Along the line of march the avenue was crowded; every coign of vantage was taken, and the balconies and windows…were crowded…Each commandery and division was headed by a band…as the commanderies went up the avenue they formed crosses, squares, triangles, the figure four, made inner and outer wheels…so that, as they proceeded, their plumes and brilliant uniforms were constantly making intricate and beautiful kaleidoscopic pictures…The column having marched to the base of the obelisk, opened ranks three deep and faced in…The ranks were closed, and the commanderies were massed on the West side and the lodges on the North and East sides, while the South side was crowded with spectators.” (Transactions, 1881) 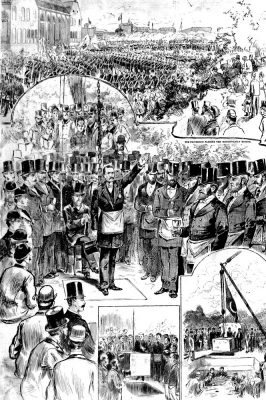 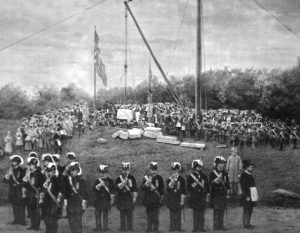 During Grand Master Jesse B. Anthony’s address, he said, “That [obelisk, for] which we have today laid the foundation stone, was one of two originally located at Heliopolis some 3,400 years ago, and afterwards, [1,903 years ago], removed to Alexandria, where they received the name of Cleopatra’s Needles. One of these now adorns the city of London, and the other will add to the attractiveness of this place and recall to our minds by its allusions the important lessons of past centuries…There is nothing done in masonry that is not for a purpose and is not designed to impress its lessons upon us. What is the design upon the trestle board today? What has been brought prominently before you on this occasion?…Is it not that a man’s work in this world lives long after he has laid down the implements of labor, and that his influence does not entirely cease with the termination of life’s powers? This obelisk erected thousands of years ago is not without its lesson to us of today. The ancient workman did not build for an age, but for eternity. So with us, brethren; we may not consider that our efforts amount to much of themselves, but nevertheless every one has his influence, and in a greater or lesser degree we contribute to the aggregate whole.

“Let it be our endeavor therefore to lay the foundation of our character on a broad, sure and deep foundation…as will bear the application of the plumb, square and level; let us…build upon that foundation a character which is above reproach…And, when finally we have completed our task; erected a monument of moral grandeur and symmetry; achieved something which is for the welfare and advancement of the human race; then in after years the coming generations will treasure your memory, imitate your example, point to your deeds, and draw inspiration from your life as one worthy of their veneration.” (Transactions, 1881)

Paul Orban was an artist whose is best known for his illustrations of the science fiction and fantasy pulps and magazines, providing cover art and line work. “..his work appeared in countless titles including, but not limited to, ‘Astounding Stories, Astounding Science-Fiction, Clues Detective Stories, Popular Detective, Skyfighters, Strange Stories, Terror Tales, Popular’s Horror Stories, Texas Rangers, Thrilling Adventures, The Shadow, The Whisperer, The Phantom Detective, The Avenger, and Doc Savage.’ [Orban illustrated ‘Doc Savage’] from its first issue right up to its last in 1949.” (Kalb, 2004)

– D’Alton, Martina. The New York Obelisk or How Cleopatra’s Needle Came to New York and What Happened When It Got Here. The Metropolitan Museum of Art, New York, 1993 [Images of the cornerstone laying];
– Kalb, Dave, The Avenger Archives website, 2004;
– The New York Masonic Outlook, The Board of General Activities of the Grand Lodge of New York, Boonville, NY, January, 1930, Vol. VI, No. 5;
– Weinberg, Robert, A Biographical Dictionary of Science Fiction and Fantasy Artists, Greenwood Press, New York, 1988
– Transactions of the Grand Lodge of Free and Accepted Masons of the State of New York, Thomas Holman, Printer, New York, 1881, pp. 108-125