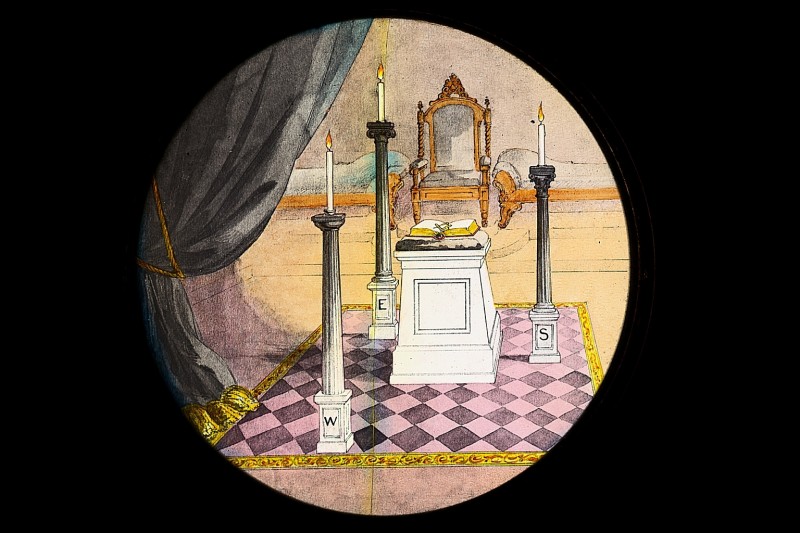 In May of 2018, the Livingston Masonic Library received a spectacular donation from Fairport Flower City Lodge No. 476, in Fairport, NY: a working “Magic Lantern,” or Stereopticon, with a large set of Masonic Lantern Slides.

The donation was made In Memory of Worshipful Allen B. Fowler, one of the Lodge’s Past Masters who took care of the projector for many years and prevented it from becoming lost or destroyed.

The Projector came with a fantastic set of Masonic Lantern Slides, which were used for illustration during the Degrees.

These slides appear to be either hand-colored, or made by a process which was somewhat unique in America, whereby a photograph of a drawing was made, and slides were printed from the photograph.

The Magic Lantern has a manufacturer’s plate:

Magic Lanterns were produced as early as the 1600s, but did not become commonly used until the mid/late-1700s. This particular Magic Lantern was made between 1882 and 1925.

The Library and Museum is very grateful to Fairport-Flower City Lodge No. 476 for their donation. They have continued the tradition of preserving something valuable for their current and future Brothers by donating it to the Library. The Library hopes to present a Magic Lantern Slide Show in 2019, using this fantastic, working Magic Lantern and its accompanying 37 Wood-framed Slides. Please keep an eye on the Library’s Events page so as not to miss it!

As an addendum to this post, it must be noted that in December of 2018, Westbrook Lodge No. 333 also donated a Magic Lantern from a later timeframe, with another, different set of Lantern Slides, for which the Library is also quite grateful. This gift allows the Library to show a range of the Magic Lanterns, as we hold one which is earlier than the Fairport-Flower City Lodge No. 476 donation, and one which is much later than that and later than both recent donations. Therefore, the Library now proudly holds four completely different Magic Lanterns.