St. John’s Lodge No. 1 was contacted by Pinstripe Productions, a documentary filming company based in Glasgow, Scotland, regarding the making of a documentary on Robert Burns. They had been commissioned by BBC Scotland to prepare a program for Burns Night next January 25.

Naturally, a number of programs on Burns have come out of Scotland, and in this case the intention was to focus on his influence on the United States, in particular how his poems came to be published over here. However, very soon into the research phase they realized that his membership in Freemasonry had a profound effect on his outlook and his output.

We had barely a week to put everything together in time for the filming. Firstly, the company had to be checked to make sure it was bona fide and that it wouldn’t show Masonry in a bad light. Fortunately, contacts at BBC Scotland were able to reassure us on that point! Then we had to clear a number of hoops with Grand Lodge: firstly the Grand Master’s permission had to be obtained, then the Trustees of the Masonic Hall and Home, and as the Trustees of the Chancellor Robert R. Livingston Library were informed (since we intended to include some artefacts). Finally, the Building Management had to be consulted since there were requirements regarding access to the building, insurance policies, etc. Everybody pulled together, and all the necessary steps were accomplished in only five business days. 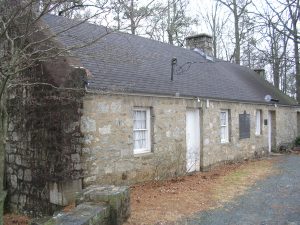 On Monday, October 24, Morgan Aronson, the Librarian, Catherine Walter, the Curator, RW Pierre de Ravel d’Esclapon, Vice President of the Board of Trustees of the Library, and RW Piers A. Vaughan met with Producer Robert Neill and Director Ian Lilley to discuss the project. The team had already been to Illinois to cover President Lincoln’s interest in Burns; to Atlanta, GA to investigate a group who looked after a perfect replica of Burns’ house in Scotland; several Burns and Historical Societies in North Carolina, Washington D.C. and New York, and had now come to us to cover the Masonic angle. As well as his poetry, Burns was attracted to Masonry for a number of reasons. Certainly the contacts he made helped him to get published. He was not a rich man, and on occasion had reasons to rely on the charity of his fellow Brothers. But, being self-educated and a great supporter of the movements in the Colonies and France against totalitarian rule, he was particularly drawn to the ideas embodied in the Enlightenment, and Masonry provided a safe haven for all these threads in his life.

The greatest challenge was the need to show a Lodge meeting, to give an indication of what Robert Burns would have attended in the 1770s. Naturally it was not possible to show a real meeting, and the notice was far too short to assemble a particular Lodge. Therefore requests to help the filming went out across the First Manhattan District, and was followed up by an Atholl request the day before shooting.

On the night an amazing thirty-three Brothers showed up to help – a number as surprising for its Masonic significance as its size! To better reflect our links to the United Kingdom and early Masonry, the Brothers, who had come from several Districts, were largely clothed in the type of aprons which are universal across Scotland and England, and kindly loaned for the occasion by St. John’s Lodge No. 1, A.Y.M. As a final touch, the altar was covered with the St. John’s Lodge altar cloth, since the oldest Lodge was founded in 1757m, and this date tied in nicely with the link the Produced was trying to establish.

The topic debated was the significance of the number ‘three’ to Masons, at it was a lively affair, while always being cautious not to divulge and Masonic secrets. Following the debate, the cameras continued to roll to capture the warm and affectionate exchanges of fellowship between the Brothers. Then RW Piers A. Vaughan talked on early Freemasonry in New York, and linked the meeting in the grandeur of the Empire Room with the humble Lodge room which Burns would have attended. In its early days St. John’s Lodge met at the bottom of Manhattan in the upstairs rooms of taverns, much like Robert Burns’ Lodge. However, despite the rich appointments of the current meeting-rooms, little else would have changed in terms of dress, the ritual, the topics of discussion, and in particular the morality, spirituality, and call to acts of charity which distinguish the Craft. Finally, a visit to the Library and a discussion with Morgan and Catherine rounded off what all agreed was a most successful evening.

The program on Robert Burns, as mentioned above, will air in the United Kingdom on January 25, 2017. The Library will be receiving a DVD copy for its records. But it would be surprising if a program of such interest to Americans would not be aired on one of the channels shortly thereafter! 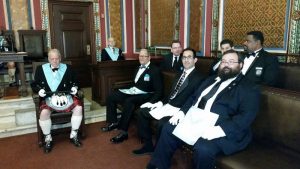