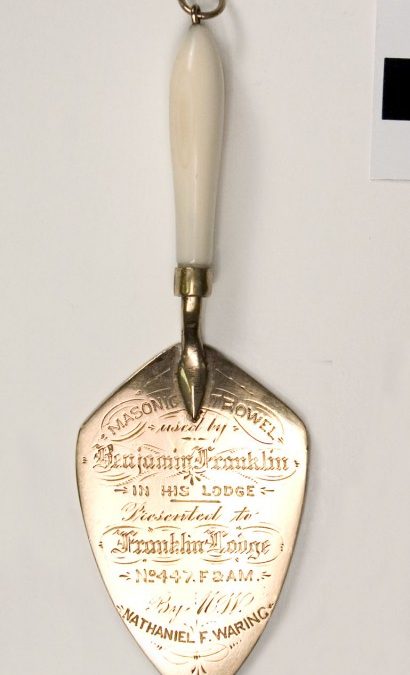 This trowel was found in the vault of the old United States Bank by:

Engraved on the face of the trowel is:
“Masonic Trowel used by Benjamin Franklin in his Lodge –
Presented to Franklin Lodge No. 447 F&AM
by MW Nathaniel F. Waring.”

MW Benjamin Franklin
Provincial Grand Master of Masons in Pennsylvania
1734, 1749 and 1760.
He was a member of St. John’s Lodge in Philadelphia.

In France, he affiliated with The Lodge of the Nine Sisters, The Lodge of the Good Friends and The Respectable Lodge of Saint John of Jerusalem. He was an inventor, a printer, a statesman, an ambassador and a signer of the Declaration of Independence. He founded the Leather Apron Club in 1727.

In 1734, he re-printed the 1723 Anderson’s Constitutions. His printing of this was the first Masonic Book printed in America.

At the Union in 1858, the Phillips Grand Lodge Officers were granted legal Past Grand Officer status.

Don’t miss the Apron Exhibit in the Wendell Walker Lounge
on the ground floor of Masonic Hall where on display are the Masonic Aprons of both
MW Daniel D. Tompkins and MW Isaac Phillips.