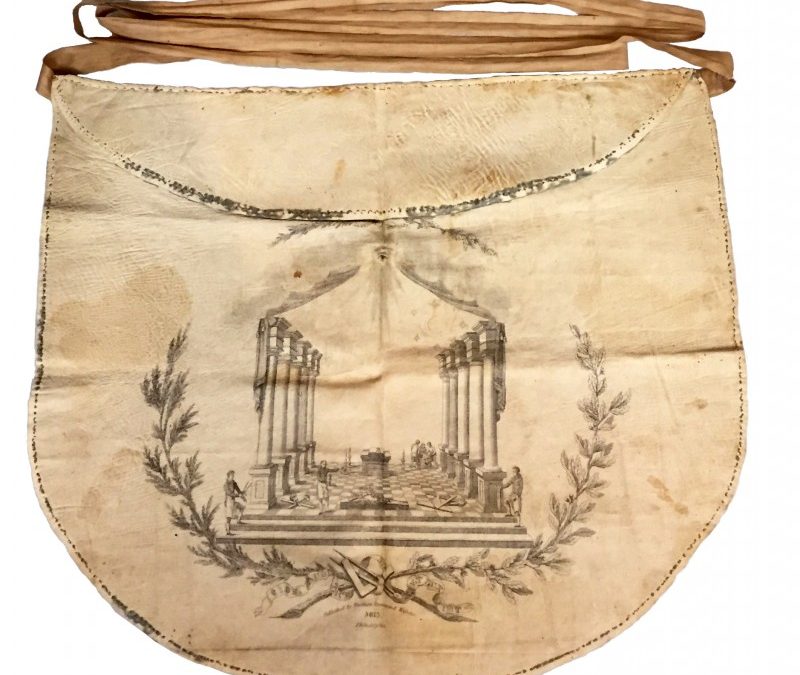 Within the Artifact Collection of the Livingston Masonic Library of the Grand Lodge of New York, is an apron which is attributed to the Marquis de Lafayette which was published in 1813 by Brothers Desilver & Webster.

The apron is made of leather, with a black ink transfer print stamped on the front. There is a canvas belt, and remnants of a blue silk trim. The scene depicted is the Master Mason degree, with unusually explicit imagery. It is framed by ten varied columns, and includes the traditional Masonic symbols. 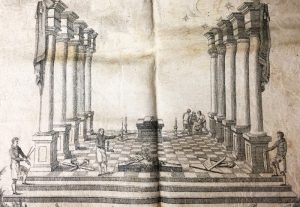 Under the flap is written, “Marquis de Lafayette.” The signature does not match Lafayette’s actual signature, so if he did indeed wear this apron, it was someone else who wrote his name.

The Marquis de Lafayette, whose full name was Marie Joseph Paul Yves Roch Gilbert de Motier, was born on September 6, 1757. By 1770, when he was 13 years old, both of Lafayette’s parents had died, and had left him a vast estate.  He refused to become part of the French court, and in 1771, he became a soldier.

In 1776, at 19 years old, he bought his own ship and came to fight with the American colonists against England. He and George Washington became good friends, so much so that Lafayette later named his son George Washington Lafayette. During the Revolution, Lafayette served at Valley Forge and at the Battle of Yorktown and was present when Cornwallis surrendered.

From 1778 to 1780, Lafayette was in France, helping Benjamin Franklin raise funds for the colonists, and in 1781, he returned to America as a hero. After 1781, Lafayette’s first visit back to America was in 1784, at which time he presented George Washington with a Masonic apron.

Back in France by 1789, Lafayette became a member of the French national assembly, but was later named traitor by this same body during the war with Austria.  Imprisoned by the Austrians from 1792-97, he was freed in 1799 and returned to France.

In 1824, 40 years after his last visit, Lafayette returned to the United States. During that visit, he toured all 25 states and received more Masonic honors than any other Freemason before or since. More than 75 Masonic bodies in the United States have been named after Lafayette.

As for his Masonic membership, Lafayette said that he was raised in France before coming to America.  His Lodge may have been Loge La Candeur in Paris, or Loge Contrat Social of Paris. It is also possible that he was raised at a military lodge in Morristown, N.J., or in 1777 at Valley Forge, as some others have said.

Lafayette was definitely a Freemason, whether or not the time and place of his raising is ever identified with certainty. He also became a Royal Arch Mason, joining Jerusalem Chapter No. 8 in New York City on September 12, 1824. He then joined the Knights Templar in Morton Commandery No. 4 and in Columbian Commandery No. 1, both of New York City.  In the Scottish Rite, he received the degrees in the Cerneau Supreme Council of NY, and was made was made a 33rd degree Mason and Honorary Grand Commander of that body.

A newspaper in the Livingston Library’s collections may hold the clue as to why this Apron is in the collections, as in 1824, the Grand Lodge of New York held a celebratory dinner for Lafayette. (An invitation to that dinner is also part of the Library’s archives. It was written by Right Worshipful Elias Hicks, Grand Secretary, to Worshipful Richard Riker.) 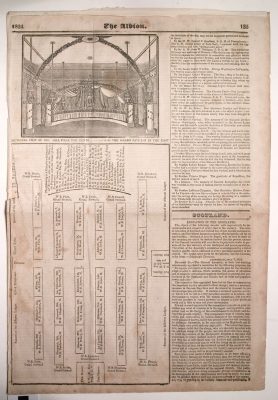 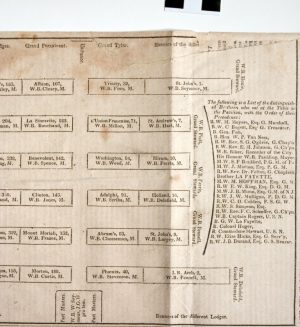 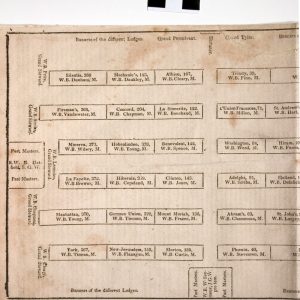 The newspaper article about the dinner shows the seating plan, naming each Lodge in attendance as well as the name of the Master of each Lodge. The article reads, in part, as follows:

“On Monday, Sept. 20th, the Fraternity of Free and Accepted Masons gave a grand banquet to their Brother La Fayette, at Washington Hall, which, for splendour and effect, may vie with any thing of the kind ever witnessed in this country. We have annexed a plan of the room, together with an engraved view of the splendid pavilion erected for the occasion in the east end of the Hall. The following description we copy from the New-York Statesman. There are in the city of New-York, thirty Lodges, embracing several thousand Brethren. Several excellent songs, composed for the occasion, were sung, and the Brethren, with the utmost harmony and conviviality, enjoyed the festivities of the day to a late hour.

In the East a lofty pavilion was erected, stretching nearly across the Hall, and the top of which rose to the ceiling. In front of this splendid recess, at the summit, extended an arch of laurel and other evergreens, studded with red and white roses, and filled with lamps, which sparkled with variegated colours among the foliage. At the bottom, a semi-circular table, raised several feet above the floor, was erected, adorned with jets d’eau, and various masonic emblems.–The back of the pavilion was hung with banners, and in the centre was a splendid transparency, illustrative of the early history of masonry. 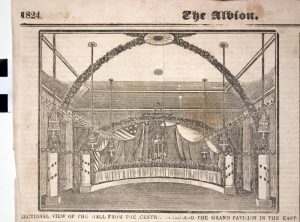 “Opposite this saloon, in the West, was another recess, scarcely inferior in splendour to that in the East, with a large transparency representing Washington and La Fayette, wearing their sacred badges, in the attitude of shaking hands. The Genius of America, surrounded with a halo of glory, and raised upon a pedestal, held in either hand a wreath of laurel, about to be placed simultaneously upon the brow of each Hero. Beneath was the inscription, Lux et Veritas — Light and truth.

In the South were full-length portraits of Washington and Hamilton, in frames highly gilt and embellished, and overarched by a rainbow, with a span of perhaps thirty feet. It was a transparency, and when lighted exhibited all the hues of the beautiful phenomenon in nature, which it was designed to represent.

In the North was another transparency, displaying in large capitals the following inscription: ‘La Fayette, the Friend of Freedom, the Benefactor of Mankind.’ Above this was the orchestra, embowered with evergreens, so that the band were entirely concealed from the company, and the music seemed to burst from an enchanted copse, as a intervals its inspiring notes rung through the alcoves of the spacious apartment.

Across the Hall, diagonally, from corner to corner, a distance of about one hundred feet, along the ceiling, extended two arches woven of laurel and intermingled with roses in the most tasteful manner. At the point where they crossed each other in the centre, was an emblem of the All-seeing eye, composed of a mirror surrounded with splendid radii several feet in diameter. Faint as every human representation of this object must be, the sacred symbol was nevertheless striking and impressive.

The Hall was lighted with eight large chandeliers, and with an almost countless number of small lamps, which twinkled among the evergreens and other ornaments, pouring a flood of light, which may be imagined, but cannot be described. The effect was much augmented by the quantity of glass which covered six or seven tables extending the whole length of the room, and entirely filling the area. To this must also be added, standards of the several lodges unfurled and glittering in every part of the Hall, together with the jewels and emblems of the ancient order. Such is an imperfect outline of the brilliancy of this festival.

At 4 o’clock, the Grand Lodge met at the Hall, and being duly opened, a committee was appointed to wait on Gen. La Fayette and escort him to the Lodge. Upon his arrival, he was met at the door by the Grand Marshal and Grand Stewards, and ushered into the Hall with the honours of masonry. Upon reaching the East, the Most Worshipful Grand Master, Martin Hoffman, addressed him as follows:

‘Brother La Fayette — Your return to the United States has re-kindled the recollections of the surviving warriors and patriots of our revolution, and the joy which pervades every heart evinces the deep gratitude of all our citizens.

‘Permit us, your Masonic Brethren, to join the general voice of gladness, to offer you the hand of friendship, to welcome you among us, and to express the warmest sentiments of brotherly love.
‘We receive you with pride and exultation; we hail you as a Brother and Philanthropist; we cherish you in our hearts as a patron of our order.

‘To the names of Washington, Livingston, Clinton, and other distinguished Masons of our country, who have shed a lustre on our institution, who have presided over our labours, who have patronized our assemblies, we now, with heart-felt gratification, record in our annals, the presence and name of La Fayette.’

To which the General made the following reply:

‘I am happy in your affectionate welcome; I am proud of the high confidential honours you have conferred, and purpose farther to confer upon me. Our masonic institution owes a double lustre to those who have cherished, and to those who have persecuted it. Let both glories, equal in my opinion, be the pride of every member of our fraternity, until universal freedom insures to us universal justice.’

After these ceremonies, and at about seven o’clock the company, consisting of between five and six hundred brethren, the largest assemblage of the kind, we believe, ever witnessed in this country, proceeded to the dinner table, and having taken their places, the Grand Officers and their guests moved to the room in procession, in reversed order, as follows: Grand Tiler. Grand Pursuivant. Grand Stewards, 2 and 2. Grand Sword Bearer. Grand Chaplains, 2 and 2. Grand Secretary. Grand Treasurer. Jun. Grand Warden. Sen. Grand Warden. Guests — 2 and 2. Deputy Grand Master. Grand Deacon — Grand Master — Gen. La Fayette — Grand Deacon. Grand Marshal.

The procession opening to the right and left, the Grand Master entered and took his seat in the East, under the canopy above described, supported on the right by Gen. La Fayette, and on his left by the Deputy Grand Master. On each side were arranged according to the masonic rank, the distinguished brethren,

Perfect order, fraternal feeling, mirth, and hilarity prevailed at the convivial board. After the cloth was removed, the following wonderful toasts were given:

The General thereupon rose, and after having expressed his grateful acknowledgements, gave the following toast in return: Liberty, Equality, Philanthropy, the true masonic creed —
may we, by the practice of these principles, ever deserve the esteem of the friends — the animadverson (sic) of the enemies of mankind.