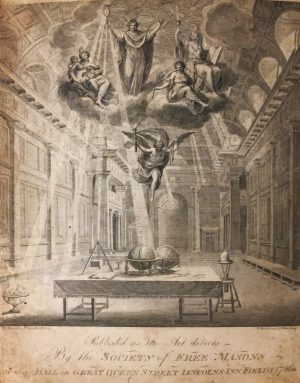 “The Rev. James Anderson, D. D., is well known to all Masons as the compiler of the celebrated Book of Constitutions. On the 29th of September, 1721, he was commissioned by the Grand Lodge to collect and compile the history, charges, and regulations of the Fraternity from the then existing ancient Constitutions of the Lodges. On the 27th of December following, his work was finished, and the Grand Lodge appointed a committee of fourteen learned brethren to examine and report upon it. Their report was made on the 25th of March, 1722; and, after a few amendments, Anderson’s work was formally approved, and ordered to be printed for the benefit of the Lodges, which was done in 1723.” Mackey’s Encyclopedia

The Chancellor Robert R Livingston Masonic Library and Museum of the Grand Lodge of New York’s holds three copies of the 1723 original edition, and one copy of the very rare 1734 Benjamin Franklin reprint, the first Masonic book printed in America.

This frontispiece comes from the 1784 John Noorthouck edition, in which, “we are, for the first time, confronted with a clear and deliberate representation of Masonic globes…The architecture depicted is that of the  inside of Free Mason’s Hall. Faith, Hope and Charity are represented at the uppermost part of the print. In the center, Truth holds a mirror from which rays of light descend.” Beresiner, Masonic Papers.