Brother John Rowland “Jack” Busch was Initiated into Master Builder Lodge #911 (now Ken-Ton #1186) on January 15th, 1942 and raised to the Degree or Master Mason in March 1942. In August 1942 he enlisted in the US Army Air Corps. Bro. Busch was Killed in Action on January 21st, 1944 while serving as a Staff Sergeant & Asst. Engineer on B-24 Liberator with the 38th Bomber Squadron, 30th Bomber Group, U.S. Army Air Force during World War II off the shore of Tarawa Atoll, Gilbert Islands.

Bro. Busch’s remains were recovered by History Flight, Inc. on the island of Tarawa in 2017 but not confirmed until earlier this year by the Defense POW/MIA Accounting Agency (DPAA) at Hickam Field, Oahu. This may be partially due to the military believing that his remains were exhumed on Tarawa and returned to the family in 1946.

On Thursday, November 13, 2019 the members of Ken-Ton Lodge #1186; assisted by Brethren from Hiram #105, Harmonie #699, OM, and RWBrian Will, Grand Chaplain; conducted a Masonic Funeral Service for Bro. John Rowland “Jack” Busch at Acacia Park, N. Tonawanda, New York. His family attending included Bro. Busch’s sister, who will be honored early next year for her 75 years of membership in OES, and his nephew Bro. Jack R. Busch. 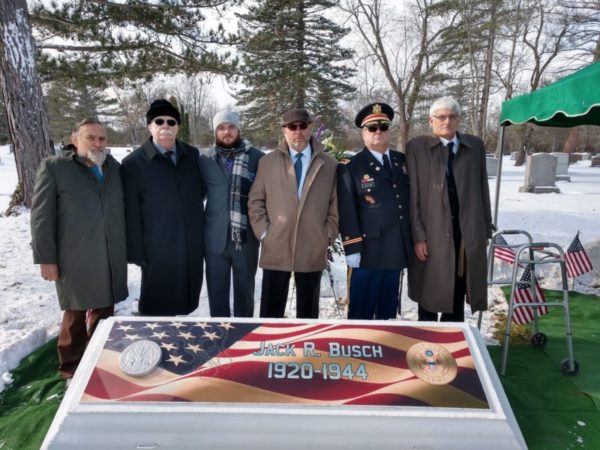