Engraved around the lid is: 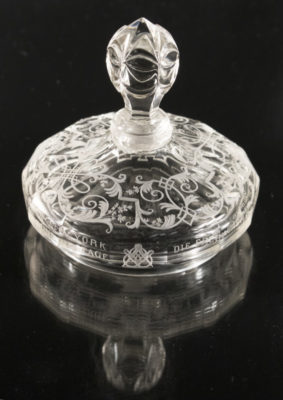 In a joint effort, the Praga Masonica Society and the Gallery of Glass in Klatovy (PASK), which is a municipal gallery housing the largest Loetz glass collection in the world, has just mounted a new exhibit, Bohemian Masonic Glass, in the town of Klatovy, in the Czech Republic. Klatovy is an old, charming market town in West Bohemia, not far from Pilsen, and in the 18th Century, it was the home of the military Lodge Sincerite.

Please click here to see the video of the opening. The exhibit will be held from November 14th, 2017, until February 28, 2018. This exhibition is the result of many years of preparation, and shows objects from public and private collections across Central Europe.

The gift was also mentioned in the Grand Lodge of New York’s official publication The Masonic Outlook in June of 1931, on page 308. In the Annual Proceedings of the GLNY for 1931, it lists that RW Felix Lenhart and RW Gustav Steinert were in attendance representing the Grand Master of Grand Lodge Lessing of Czecho-Slovakia.

Mr. Sadilek contacted me at the Livingston Masonic Library to see if we still had the goblet. When I told him we did, he said, “It was a very nice surprise to get your message, that the vase still exists and that you have found it. You made us very happy! It is remarkable, that things deposited in New York long ago do not disappear, and when searched for, they do surface. In Central Europe, much has been lost in the WWII and Communist times, and only a few things survive….[this] is an important object from perhaps the most famous glass factory in Bohemia – the Moser Company from Karlsbad (today Karlovy Vary). The firm still exists.”

We are pleased that this goblet will be included in the catalogue to be published in honor of the exhibition and in honor of Bohemian Masonic Glass.