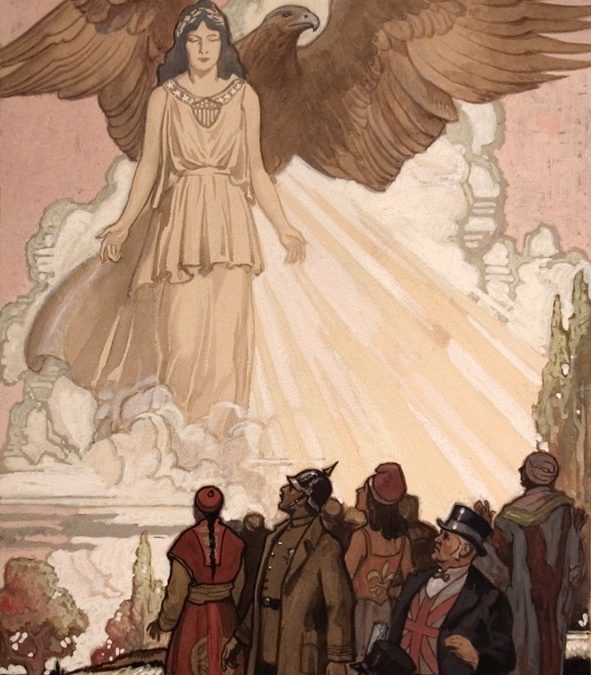 A painting by Paul Orban showing “America” floating in air with an eagle behind her, and with representatives of the world’s nations on the ground below. See the original artifact record in the Online Museum by clicking here.

This painting illustrated an article by RW S. Parkes Cadman that was published in The New York Masonic Outlook, October, 1931, titled, “This Land He Gave Us.” In the article, Brother Cadman writes:

“We Masons love our nation. To be good men and true, and citizens indeed, is a Landmark of the Masonic life equal in antiquity and binding power to the obligation to live faithfully to our great Tenets of Brotherly Love, Relief, and Truth. But our love for this our country is more than a mere matter of obligation; it springs from the very heart of the Mason…We do not want an America to boast of, but an America to love and reverence. I believe that you and I should wish for our land…[that] this land of free men, shall be the moral leader of the human race to conduct it to a higher and more practical plane of moralized international life, in which such turbulence as hate and prejudice and war shall ultimately cease …it is difficult to so act that all men shall be brethren, all stand on an equal plane, with no distinctions or race or creed or birth or blood so far as the native and majestic rights of man as man are concerned. It is difficult, but it is essentially American…

“There was not a single social leader of any great consequence among the Pilgrims, and I have no doubt that some of the lofty people who, on the strength of being their descendants, figure in the illustrated supplements of our great newspapers, would scorn those Mayflower immigrants if they appeared among us now. Those hard-bitten…men with their gentle…women…why did they come? They came to bring us freedom and laws; to bring us a free press and free debate and free education and a free church in a free state…

“Every nation has some great mission which it has either fulfilled or is in the process of fulfilling. It may die, but if it has fulfilled its mission it lives forever. So long as a schoolhouse stands, Greece cannot die. So long as a courthouse stands, Rome cannot die. So long as a church stands, of any faith, the Prophets of Israel and the Apostles of the New Testament cannot die. When the name of Greece is mentioned you think of culture; Rome, you think of law; Palestine, you think of religion; Holland, a purer patriotism; Scotland, the integrity of mind; England, the right of free association; France, seven hundred years of leadership in art; Italy, there comes a vision of all the beauty of the Renaissance, sprung from her bosom to illumine and grace Europe again.

“America—? How shall we complete that question? What shall be said of her a thousand years from now? What is her mission to mankind? What instrument is she in the vast orchestra of the nations? … its language is the language of Freedom and Right; it belongs not only to us but to all who are minded to make it their charter for the increase of Right and Justice …”

Paul Orban was an artist whose is best known for his illustrations of the science fiction and fantasy pulps and magazines, providing cover art and line work. “..his work appeared in countless titles including, but not limited to, ‘Astounding Stories, Astounding Science-Fiction, Clues Detective Stories, Popular Detective, Skyfighters, Strange Stories, Terror Tales, Popular’s Horror Stories, Texas Rangers, Thrilling Adventures, The Shadow, The Whisperer, The Phantom Detective, The Avenger, and Doc Savage.’ [Orban illustrated ‘Doc Savage’] from its first issue right up to its last in 1949.” (Kalb, 2004)

“Although Orban did some cover art, he mostly worked as an interior artist for the SF magazines. He used an attractive cross-hatched style that worked well on the inexpensive paper used for most pulp publications. Although Orban is remembered primarily as an artist who did a great deal of excellent work for ‘Astounding SF’, he also contributed to many other science fiction magazines.” (Weinberg, 1988)

Paul Orban’s Masonic work, while well-known to the readers of the Masonic Outlook, appears to have been entirely unknown in non-Masonic circles. He produced cover and interior art for the Outlook between 1929 and 1932, and the Chancellor Robert R Livingston Masonic Library of the Grand Lodge of New York is in possession of over seventeen original works by Paul Orban, most with Masonic themes.