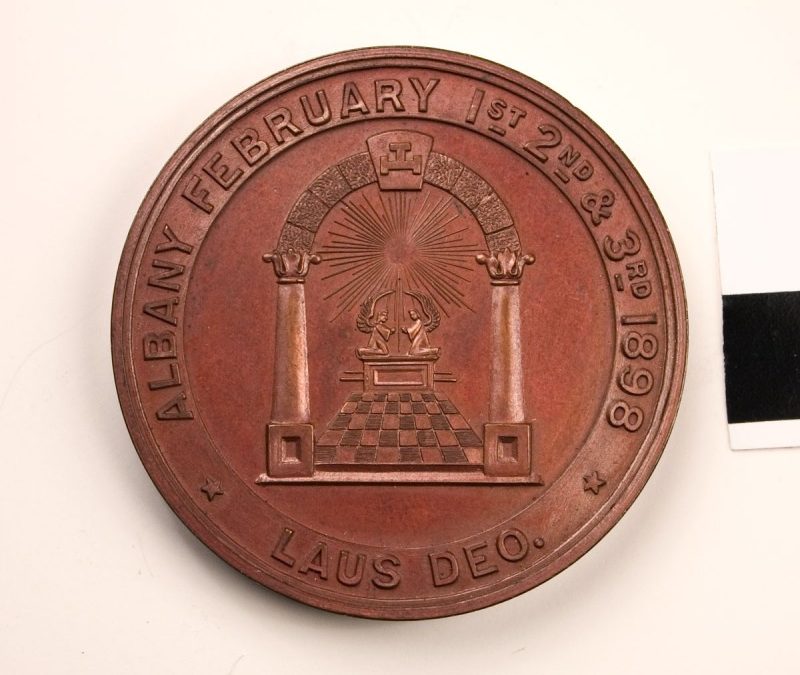 This coin-medal commemorates the 100th Anniversary of The Grand Chapter of Royal Arch Masons of the State of New York. You can see the full artifact record in the Online Museum by clicking here.

“The One Hundred and First Annual Convocation, (The Centennial,) convened at the Masonic Temple, on the north-west corner of Maiden Lane and Lodge Street, in the city of Albany, commencing on Tuesday, February 1st, A.. I.. 2428, A. D. 1898, at eleven o’clock A. M. [The Grand RAM Officers Present are listed below in the Associated Names Field.] With the Grand Officers named, as well as thirteen Past Grand Officers, there were present, “the Representatives of one hundred and eighty-five, of the one hundred eighty-eight enrolled constituent Chapters…also Representatives of Grand Chapters” from most of the other States within the United States, and from the Grand Chapter of Quebec.
In the address of the Grand High Priest, M.. E.. John Webb, Jr., he stated,
“The present Convocation of the Grand Chapter is probably second in importance to none that has preceded it, with it we close the first century of our existence, and meet, in part at least, to celebrate that event, and to do honor to those worthies who so well laid the foundations on which we have built. It is not fitting that I should here review the eventful history of this period; that duty has been committed to abler and worthier hands. Yet how marvelous the changes a century has wrought. One hundred years ago our land was a vast wilderness, with only an opening here and there; the interior of the continent a sealed book; the treasures of forest and mine unknown; but the resistless force of human energy and enterprise strode forth waving its wonder-working wand, until the wilderness disappeared. The mart of commerce, the hall of science, the temple of religion arose, and the dwellers in one small portion of the world have enjoyed in all those years unprecedented prosperity, the advantages of education and the privilege of worshiping their Maker as conscience dictated, and have been made partakers of the products of every clime, and of the fertility of every soil.
“Masonry, however, remains the same; from the quarries, stones well and truly wrought, are being brought up for the Great Building, and the faithful and earnest workman receives his reward in the consciousness of duty well performed, and in the attainment of his noblest and loftiest desires.”
He closed his address with the following:
“Finally, Companions, I cannot more fittingly close this communication to you, than by quoting from the address of M.. E.. John P. Steffner, Grand High Priest, made to the Grand Chapter of Virginia, the following tribute to the teaching and influence of the Masonic institution:
“It rests with you to make this a land of God and Masonry, in your hands is our destiny for weal or woe; if you are true to your profession, it will be a land of morality, of law and order, and of the broadest liberty; govern yourselves by the square and compass (sic) of the Mason’s creed; erect the loftiest standard of public and private honor; cultivate your minds by the tenets of this time-tried institution as assiduously as you do the wondrously fertile soil; train your children to be truthful, upright, brave and gentle…Cherish that broad and generous sympathy which throbs in unison with all humanity, which feels for every human being, and is interested in all that concerns the common weal.”
And now, my Companions, my task is finished. I have laid before you a record of my official acts. To you I am indebted for the highest honor of my life. I shall always be proud that the companions of this Great Jurisdiction committed to me for a short time, the destinies of the Royal Craft. Companions, the business of the One Hundred and First Annual Convocation now awaits your pleasure.” (Proceedings…, 1898) 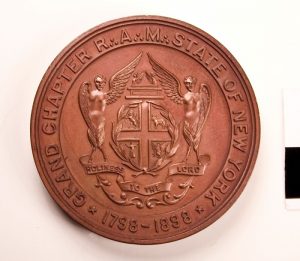 Proceedings of the Grand Chapter of Royal Arch Masons of the State of New York at its One Hundred and First Annual Convocation held at the City of Albany, February 1st, 2nd, and 3rd, A.. I.. 2428; Adams & White, Printers and Binders; Buffalo, 1898