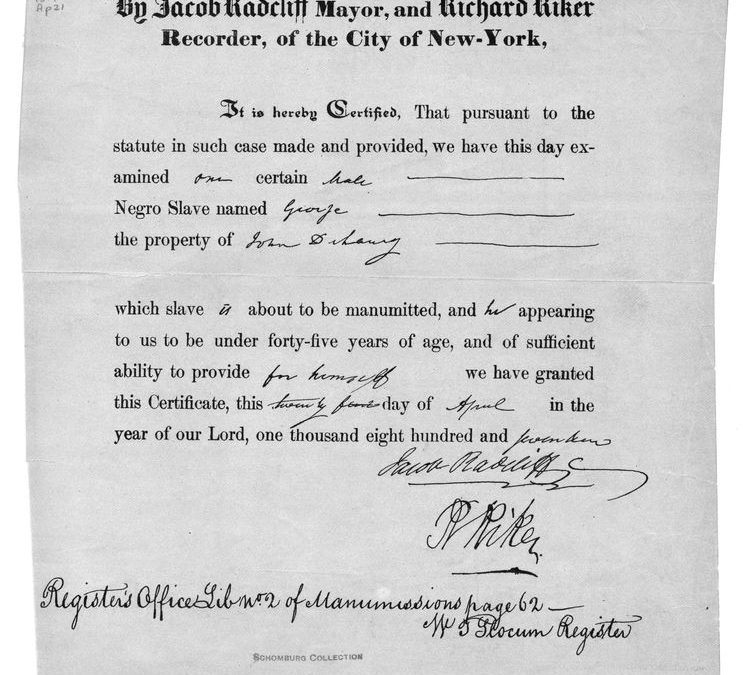 In honor of the upcoming, June 29th Free Library Lecture , Freemasonry and The Underground Railroad, by RW Moises Gomez, Past Grand Historian of the Grand Lodge of New Jersey, (Note: seating is limited, please RSVP at info@nymasoniclibrary.org) we are highlighting the copy of a slave manumission held in the Museum of the Livingston Masonic Library. Within the artifact collection are many items which are related to members of the Masonic Fraternity, and which are sometimes not the original. Here, we have a copy of a “Slave Manumission for a Slave named George…” Signing the manumission is Mayor Jacob Radcliff and Richard Riker, Recorder.

The manumission reads:
“By Jacob Radcliff, Mayor, and Richard Riker, Recorder, of the City of New-York,
It is hereby Certified, That pursuant to the statute in such case made and provided, we have this day examined one certain hale Negro Slave named George the property of John DeLancey which slave is about to be manumitted, and he appearing to us to be under forty-five years of age, and of sufficient ability to provide for himself we have granted this Certificate, this twenty fourth day of April in the year of our Lord, one thousand eight hundred and seventeen. Jacob Radcliff; R. Riker. Register’s Office Lib no. 2 of Manumissions page 62 – W. F. Slocum, Register. ”

The original, held by the New York Public Library, can be seen by clicking here.

There is no current information as to whether John DeLancey, Mayor Radcliff or William Slocum was a Freemason. However, in the Museum holdings is the 32nd Degree Certificate of Richard Riker, issued in 1808. He was also seated at the dais of the dinner held by the Grand Lodge of New York for the Marquis de Lafayette in 1824 [click here] where he is listed as W.B.(Worshipful Brother) Riker, Recorder of the City (use the zoom feature to see the names on the dais and the Lodges in attendance in the room). Additionally, Brother Riker signed the 1808 Charter of Aurora Grata No. 1, Lodge of Perfection.

“Richard Riker served as District Attorney of New York from 1801 to 1814, with the exception of a brief period. The jurisdiction then included the counties of New York, Kings, Suffolk, Richmond and Westchester. He was Recorder of the City of New York 1815-1819, 1821-1823, 1824-1838.” (News-clipping, unidentified Aurora Grata publication, Biography Files, Chancellor Robert R Livingston Masonic Library)