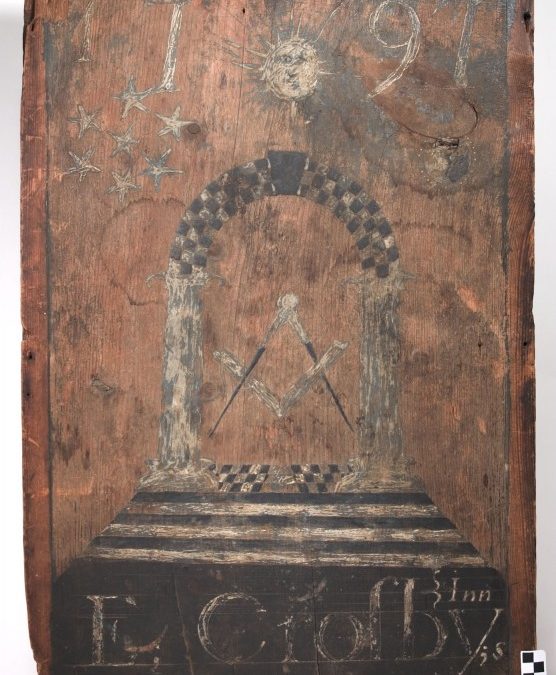 This very rare, two-sided inn sign is believed to have belonged to Epenetus Crosby, who “was an early tavern-keeper in Patterson, NY, on the road running south to Cowl’s Corners…” (Lathrop, 1926, pg. 265) See the full record in the Grand Lodge’s Online Museum by clicking here. Signs such as this advertised businesses, and, “when increased travel led to several shops in the same area, signs were accompanied by a name which could be identified by customers. Symbols remained important, however, for many years because many people could not read.” (American Sign Museum)

The history of the Lodges in this Putnam County area show that there was Columbus Lodge No. 38, in Frederickstown, NY, warranted August 4, 1794, which moved to the town of Southeast, NY, in January of 1798. The inn sign is dated 1797, so it may have been where Columbus Lodge No. 38 met right before they moved, or, it may have been decided by the members who remained in Frederickstown to meet in the inn. The Lodge founded by the members remaining in Frederickstown was Adonirum Lodge No. 69, in Franklin Township (Patterson Township), petitioning for their warrant on January 22, 1798. This lodge was succeeded by Adoniram Lodge No. 211, whose warrant was granted on September 4, 1811, and which stayed in existence until 1825. Epenetus Crosby appears to have moved back to Fishkill by 1825, so perhaps he was a driving force behind the Lodge, without whom the Lodge dissolved.

Epenetus Crosby was raised in Hopewell Lodge No. 124, located in Hopewell and then in Fishkill, NY, and he affiliated with both Adoniram Lodge No. 211 and Beacon Lodge No. 283, for which he served as Master in 1853